Contrarily, among the advances in upper extremity prostheses in the past decades, only a small fraction of the results was obtained for partial hand prostheses. Possible reasons for this discrepancy include at least the following two aspects. First, partial hand presentations are anatomically highly diverse. Therefore, it is difficult to standardize and scale a design. Second, the available space for component integration is limited, which makes it challenging to apply the solutions from the state-of-the-art prosthetic hands and arms.

After weighing the factors such as low output power from a miniature motor, low energy density of present battery, and the implementation challenges of EMG-based control, this project proposes the JTP hand, a wrist-powered partial hand prosthesis developed at Shanghai Jiao Tong University. Aimed at improving the existing wrist-driven partial hand prostheses, the JTP hand possesses i) a continuum differential mechanism (CDM) to allow adaptive grasping, ii) a force-magnifying partial gear pair to enhance the power of the grip, and iii) lockable index and middle fingers to enhance hand function. 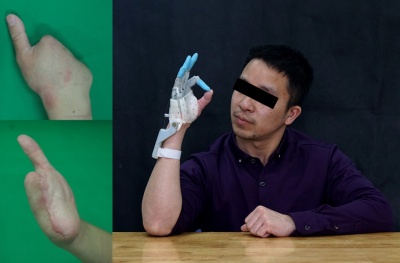 The JTP hand worn by an amputee

The JTP hand was designed with a planned finger placement and intended stump fitting process. Both the intact hand and the stump of the amputee were first scanned and imported into CAD software. Then, the outer form of the partial hand assembly was obtained by subtracting the stump from the mirrored intact hand. All the hand components (e.g., tendons, links and ratchets) should be enveloped by the outer form of the partial hand assembly. Through this carefully planned fitting procedure, the partial hand, once worn on the amputee’s stump, will resemble the other hand that is intact.

Then the JTP was worn by an amputee and a series of experiments were conducted to demonstrate the effectiveness and usefulness of the JTP hand. Wearing the JTP hand, the amputee performed grasps and pinches easily with his wrist flexed. Depending on the objects to be grasped or pinched, the wrist should flex in a range from 10° to 40°. The outputs from the CDM in the forearm cuff varied to form adaptive grasps and natural-looking pinch poses.

The grasp force of the hand was first quantified. Average forces of 15.5 N and 8.69 N for the power grasp and pinch respectively are considered well acceptable for most daily life activities.

The widely used Southampton Hand Assessment Procedure (SHAP) was followed to systematically examine the function of the JTP hand. The first set of tasks in the SHAP test is to grasp and place 12 abstract objects from and to designated positions, sometimes over an obstacle. The second set of tasks is to perform Activities of Daily Living (ADLs), for example picking up coins and undoing buttons. With the JTP hand, the amputee was able to perform all the SHAP tasks after using the prosthesis for a few hours. The IoF (Index of Functionality), which indicates the hand function level, was 83/100.

The index and the middle fingers can be locked so that they become non-backdrivable. Then, the amputee can maintain grasps without keeping the wrist flexion/extension positions. This feature allowed the JTP hand to form unique postures to further expand its functions and uses, besides adaptive grasps and pinches. The index finger can be locked at different angles so that the amputee can perform keyboard striking, writing and posing for okay easily. The lockable fingers are also useful in the scenario of weight hanging.

A complete description of the JTP hand can be viewed here: Media: JTP_hand_LD.flv.