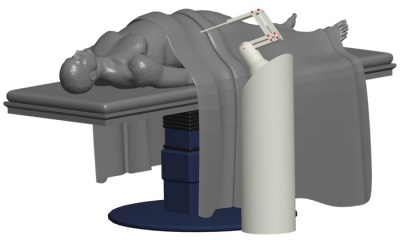 Single Port Access Laparoscopy (SPAL) might bring better surgical outcomes than traditional multi-port laparoscopy, in terms of postoperative pain, complications, hospitalization time, cosmesis, etc. Due to the increased manipulation difficulty in SPAL, several surgical robotic systems were developed, including the IREP robot which was designed by Dr. Kai Xu when he was with the Advanced Robotics & Mechanism Applications Lab, Department of Mechanical Engineering, Columbia University.

The distal module of this robotic slave will incorporate two exchangeable manipulation tools to perform typical surgical tasks, such as suturing and knot-tying. Motions of the manipulation tools will be controlled using a master console. The distal module will also integrate a stereo vision unit with built-in illumination so that surgeon operator can observe the surgical site using a 3D display device. The 3D display device and the master console shall be commercially available and will be reprogrammed or reconfigured to interact with the designed surgical robotic slave.

During surgical operations, the actuation unit will be locked to a standard surgical bed as the base; the RCM mechanism will follow a real-time inverse kinematics resolution to position and orient the robotic arm through the single port (trocar).

Functionality of the robotic slave shall be verified by conducting simulated abdominal procedures (such as cholecystectomy and appendectomy) on surgical phantoms or animal models.

Compared to the IREP robot, main improvements featured by this new SPAL robot include i) a reduced diameter of the access port, ii) an enhanced distal dexterity introduced by the RCM mechanism combined with the foldable module, and iii) an improved payload capability introduced by the modified continuum structure of the manipulation arms.