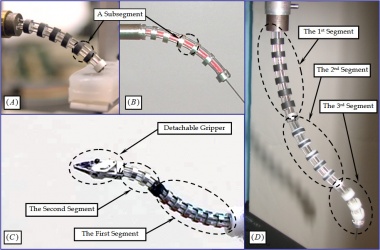 This continuum structures in this research were introduced by Simaan et al. (Simaan, Taylor et al. 2004; Simaan, Taylor et al. 2004). They consist of one or more flexible segments. Each segment consists of multiple super-elastic NiTi components (tubes or rods) called backbones and several rigid disks. The figure to the right shows several examples: insets (A) and (B) show a one-segment continuum robot, inset (C) shows a two-segment continuum robot with a detachable gripper and inset (D) shows a three-segment robot with intrinsic force sensing capability. 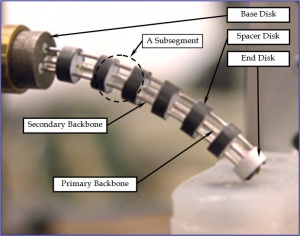 Structure of one continuum segment

According to the modeling framework, shape of the continuum segment shown assumes a constant twist distribution. Following the equivalent simplifications below, simplified models for kinematics and statics will be presented.

In the following video clips, one segment and a 3-segment arm are simulated in MATLAB. By changing the lengths of corresponding backbones, the segments bend up to 90°. A 2-segment arm can be tele-operated, whereas a 3-segment arm with force sensing capability is palpating a prostate model for tumor detection. For details, please refer to papers listed in the publication session.