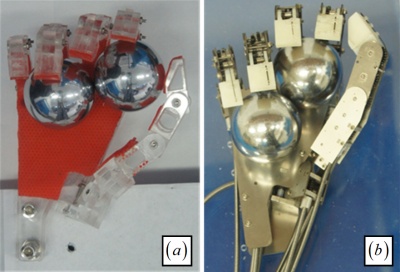 In order to realize the intended motion sequence of manipulating rehabilitation training balls on a prosthetic hand, a dummy hand was first constructed and manually posed for six different key poses. The dummy hand had identical enveloping dimensions and geometry as the one to be constructed with transmissions and actuations. The poses of the dummy hand were measured using an optical tracker and the postural synergies were extracted to guide the design of a complicated transmission system which maps two synergy inputs to 13 outputs to drive the prosthetic hand. This transmission system is hence referred to as a mechanical implementation of the postural synergies.

It was attempted to use planetary gears to realize the mechanical implementation of postural synergies since it might provide better accuracy than differential pulleys and might be easier to fabricate than designing a differential hydraulic system. Then the synergy outputs will be rotations (instead of being translations as in the other two options). The most direct way to connect these synergy outputs to the finger joint axes is to use flexible shafts. What’s more, rotations of these flexible axes would not be affected by a possible presence of wrist motions. Using worm gears and gears, rotations of these flexible shafts drive all the finger joints.

Two versions of the prosthetic hand were designed, fabricated and assembled. Version 1 was abandoned due to the bulky appearance and the flimsy construction. Version 2 has a modified internal structure with more precisely manufactured components. The hand can not only rotate the two rehabilitation training balls but also perform various grasps.